Best of 2013: “The Story of America” by Jill Lepore (Princeton University Press) 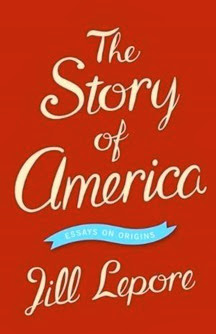 There aren’t many scholars of American history who continue to surprise me. But, in everything I’ve read by Jill Lepore – be it an article (academic or journalistic) or book-length – she has brought something new and interesting to the discussion, whether it is a new argument or interpretation, or merely a new sources and obscure (but always relevant and interesting) evidence. The Story of America is no different. This is easily one of the best history books of 2013, if not the last few years: accessible, engaging, always interesting and intelligent, but also (in its way) highly entertaining.

In The Story of America, Lepore investigates American origin stories – from John Smith’s account of the founding of Jamestown in 1607 to Barack Obama’s 2009 inaugural address. Through a series of chapters and subjects, the author brilliantly shows how American democracy is inextricably bound up with the history of print. Over the centuries, Lepore shows us, Americans have read and written their way into their own, new political culture.

All save one of the chapters in The Story of America appeared first as essays in the New Yorker. They also, together, present an argument:

“the rise of American democracy is bound up with the history of reading and writing, which is one of the reasons the study of American history is inseparable from the study of American literature. In the early United States, literacy rates rose and the price of books and magazines and newspapers fell during the same decades that suffrage was extended.

“With everything from constitutions and ballots to almanacs and novels, Americans wrote and read their way into a political culture inked and stamped and pressed in print.”

Touching upon a broad, yet connected, range of topics, this is a fascinating book. Whether discussing the origins of paper ballot, the Constitution, the I.O.U., and even Webster’s dictionary, the author weaves these small origin tales with that of the United States overall, presenting fresh readings of Benjamin Franklin’s “Way to Wealth”, Thomas Paine’s “Common Sense”; Edgar Allen Poe’s “The Raven”; and Henry Wadsworth Longfellow’s “Paul Revere’s Ride”. In addition to these now-classic texts, we read about the origins of presidential biographies, the novels of immigrants, and also accounts of the Depression. Americans have always wrestled with the idea of democracy, addressing their concerns by telling stories.

“History is the art of making an argument about the past by telling a story accountable to evidence. In the writing of history, a story without an argument fades into antiquarianism; an argument without a story risks pedantry... what people will tell you about the past is often malarkey... Historical inquiry relies on standards of evidence because documents aren’t to be trusted... One way to read this book, then, is as a study of the American tall tale. My advice is to keep one eyebrow cocked and watch out for shifty-looking characters with ink-stained hands and narrators who keep ducking into doorways...”

While Lepore does a good job of remaining objective, or at least addressing her political preconceptions head-on (for example, when joining a Tea Party gathering in Boston). Nevertheless, the book is filled with analysis of where misreadings of history have been employed to distort the truth for political gain.

For example, it’s interesting, given the Tea Party/Religious Right’s love of Jefferson, to learn that during the election of 1800, Jefferson was presented as an atheist, against Adams’s election, which the Philadelphia Aurora newspaper claimed would lead to “a religious test”. Where’s the Religious Right’s acceptance and devotion to the memory and politics of Adams…? Much of what Lepore writes about the Tea Party can be found in The Whites of Their Eyes (Princeton), which expands on the author’s analysis.

It would be very easy to quote snippets from The Story of America ad infinitum. I will resist that temptation, however I will offer a select few of my favourite moments from the book.

Samuel Eliot "Morison also complained about what he called a ‘chain reaction of dullness’: professors who write ‘dull, solid, valuable monographs’ train graduate students to write dull, solid, valuable monographs, and, before you know it, the only history people read is written by journalists. Morison didn’t // resent this – to the contrary, he urged his students to learn from the best journalists, and the best novelists, too – but it worried him.” (40-41)

Offers a fun portrait of Benjamin Franklin, and his penchant for satire - including his earliest (known) pranks, getting his brother to print the letters from "Widow Dogood".

As indicated earlier, one chapter discusses the peculiar place Thomas Paine and his Common Sense occupies in America’s collective consciousness of the US Revolution. Lepore shows how he should certainly be considered among the ranks of Founders; and yet, because of contemporary grudges, he has been ultimately disavowed by the other Founding Fathers (John Adams, in particular, appears to have loathed Paine, and Jefferson refused to have his correspondence with Paine published). Lepore’s account presents a picture a little as though the monied Founders decided to write the poor fellow out of history. Alongside this, the author offers some interesting context for Paine’s success and longevity, despite the influential critics arrayed against him:

“Paine’s views were hardly original; what was new was his audience… But, while Enlightenment writers wrote for one another, Paine wrote, as always, for everyone. To say that Paine was vilified for doing this is to miss the point. He was destroyed.”

As with Jefferson’s religious convictions, the current Right Wing’s love for Thomas Paine conveniently glosses over his frequently, strongly expressed distaste for organised religion. But, nor were his views entirely convenient for liberals:

“Admirers of Paine's political pamphlets have long tried to ignore his religious convictions… So wholly has The Age of Reason been forgotten that Paine’s mantle has been claimed not only by Ronald Reagan but also by North Carolina Senator Jesse Helms, who in 1992 supported a proposal to erect a Paine monument in Washington, DC. Nor have liberals who have embraced Paine had much interest in the latter years of his career. Maybe that’s what it means to be a lesser SuperFriend: no one cares about your secret identity. They just like your costume.”

In the chapter about America’s history of debt – appropriately called, “IOU” – Lepore offers a great suggestion for why the country has experienced such cyclical boom-and-bust periods (outside of economic theory), and how it can also be an analogy for Americans’ approach to history, too:

“Americans have discharged one generation of debtors after another, but, as [Samuel] Johnson put it, we do not find that their numbers lessen. We only find that we forget, when times are good, that times were ever bad. The colonies were settled, the nation founded, the country built, by debtors. Americans have forgotten that; debtors like to forget… Mostly, though, we’re bankrupt of history.”

“THE MAN OF THE PEOPLE”, the chapter on inaugural addresses should appeal to and interest presidential history junkies. They have, however, been “following the same script for two centuries. East of piffle and west of hokum…” As a non-American and political cynic, I was particularly taken with the following statement:

“Americans first voted for a president whose campaign touted him as a rugged, stubborn, hot-tempered war hero, a man of the people, in 1824. There is no older or more hackneyed gambit in American politics, no maneuver less maverick. The Erie Canal is younger.”

An example of the interesting nuggets Lepore manages to add to her accounts and analysis: a comment by Edgar Allan Poe, in a letter attempting to gain a political sinecure: “To coin one’s brain into silver, at the nod of a master, is to my thinking, the hardest task in the world.” The whole section on Poe, actually, is a fascinating account of the writer’s life and the evolution of his place in America’s literary canon.

Another interesting tidbit, from the aforementioned chapter on presidential addresses and biography, Lepore discusses Abraham Lincoln’s fondness for reading his own biographies. For example, how in President Lincoln “read Howell’s Life of Lincoln, more than once. He checked it out of the Library of Congress, twice. It was in his office when he was assassinated. In the margins, he made corrections.” Oh, to own that copy… If ever there was a rare book that I now have to read, it would be this edition.

At another point, Lepore draws a comparison with today’s anti-intellectualism and anti-education movements with those in the past. For example, during the Scopes Evolution trial:

“The only case [Darrow] ever volunteered for is also the one that secured his lasting fame…: defending John Scopes, charged by the state of Tennessee with the crime of teaching evolution. In the nation's schools and colleges, Darrow said, ‘the sharp-shooters of bigotry’ were picking off teachers who cared about ideas. ‘I knew that education was in danger from the source that has always hampered it – religious fanaticism.’”

In chapter 19, “Rap Sheet”, Lepore briefly tackles the conundrum that is America’s high murder rate. Now, she cites some scale (simply “rate” followed by a number) which isn’t particularly illuminating. In the white south, “where the murder rate has always been disproportionately high, as it has, and remains, in all the so-called law-and-order states”. This may have been the weakest chapter in the book, but it was still interesting.

Final chapter examines the evolution (or, by some measures, devolution) of presidential inaugurals. From specific analysis to the use of Garfield’s diary entries for the time he was composing his own (by first reading all the others to date), it’s an excellent closer.

The Story of America is a must-read for anyone interested in American history and the history of American publishing and writing. A fascinating, engaging, and expertly written book. I cannot recommend it highly enough.

Posted by Civilian Reader at 13:37